Mitsubishi has built its brand around its 150 years of strong tradition, it is a neighborhood name due to its various enterprises in Japan, but also a widely known trademark throughout the world.  The company has survived several economic bubbles and collapses due to its governing philosophy of slow but steady growth.

The History of Mitsubishi

Mitsubishi was originally founded as a shipping company in 1873 but didn’t begin automotive operations until 1917 with the introduction of the Mitsubishi Model A, an entirely handmade seven-seater vehicle.  Proving too expensive to produce and market, the model was quickly discontinued and the company did not resume automotive manufacturing until 1937, producing a prototype vehicle for military use.

After its dismantling after World War II by Allied Powers, the company split into three separate entities across Japan, with each involved in automotive production.  Reclaiming its brand and merging back into a single company in 1954 after the San Francisco Peace Accord, Mitsubishi with its now highly diversified production assets in not only automotive, but aluminum, petrochemicals, electronics, and aerospace.

In the 1980s, Mitsubishi emerged as one of the world’s major vehicle producers, and throughout the 90s produced the highly profitable Diamante and Pajero vehicles, and moved swiftly towards the production of SUVs as they began trending with other car companies.

The Mitsubishi enterprise has gone through a good deal of changes, both in the past and as recently in 2015, where they pulled out many of their U.S. operations to focus their primary services in their founding country of Japan. However, considering its many diversified assets they remain a strong vehicle manufacturer in both countries and continue production and distribution within the United States.

Their vehicle manufacturing today is located in Ann Arbor, Michigan, and their U.S. administrative headquarters is in Franklin, Tennessee. Mitsubishi has a substantial collection of notable cars, including the Eclipse, the Montero, and the Lancer, all of which were discontinued in the 2000s. Today, the Mitsubishi current vehicle lineup is made up primarily of midsize sedans and crossover vehicles, most notably the Mirage, the Outlander, and the Eclipse crossover vehicle, rebranded from its origins as a compact sports car.  Mitsubishi has shifted its vehicles to the booming trend of family-oriented cars, boasting great gas mileage, enhanced safety features, and a more technology-friendly vehicle.

Mitsubishi vehicles have also dived into the industry of producing electric vehicles, namely the Outlander PHEV, which is their bestselling plug-in hybrid vehicle. The Outlander PHEV was recently awarded the ‘Family Green Car of the Year for 2020 by the monthly automotive publication ‘Green Car Journal.’ Mitsubishi’s long-term aims for their electric models is to reduce consumer costs to make them more affordable and accessible.

Visit Premier Clearance Center of St. Bernard today to take a look at our inventory of used Mitsubishi Vehicles. You can save money when traveling from New Orleans to Baton Rouge by driving a fuel-efficient Mitsubishi model. 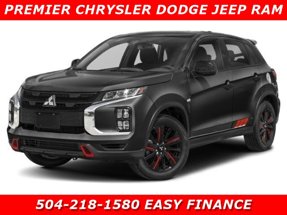